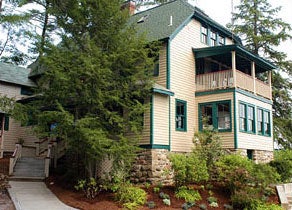 Originally built in 1896, the lodge was significantly renovated in 2002-2003. Now known as "The Education Center" the building was outfitted with new foundational footings, a fire escape, heating and air conditioning, all new bedrooms,laundry room, rec area, bathrooms, and furniture. Also added was a completely new third floor computer center with a large screen projector for presentations, and a state of the art industrial kitchen which would make gourmet chefs of the world jealous. A laundry room.

As a result, the new Education Center serves as a 12 month teaching, housing, and meeting facility with state-of-the-art media, and computer networking capabilities. The commercial kitchen in the Education Center which was renovated in 1997, is capable of serving up to 40 people.