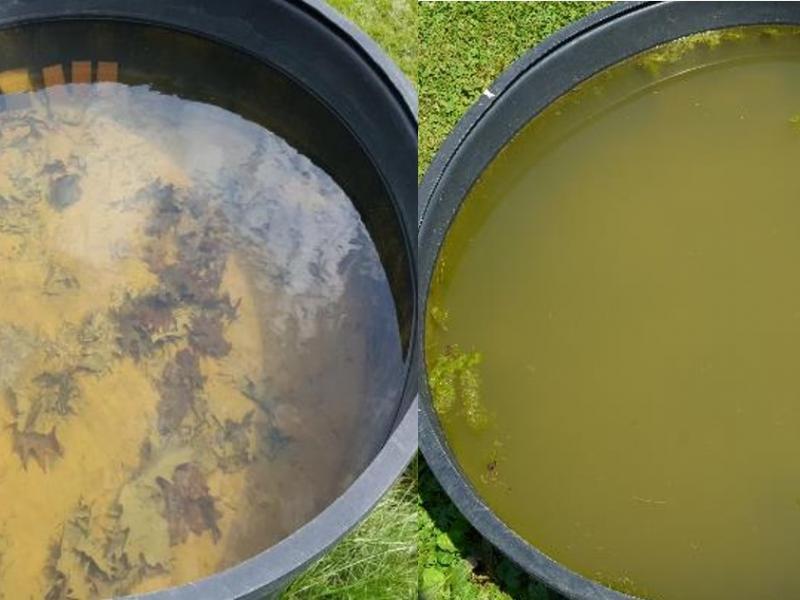 TROY, N.Y. — Small animals at the base of the freshwater food chain can rapidly adapt to salt pollution – from sources like winter road deicing, agriculture, and mining – but at a price. In a special December edition of Philosophical Transactions of the Royal Society B devoted to freshwater salt pollution, research shows that salt-adapted freshwater zooplankton grow 65 percent slower than regular zooplankton. Their slow growth cascades down the food chain in environments polluted with the most commonly found salt, triggering algal blooms.

“There’s an upside and a downside to evolving salt tolerance,” said Rick Relyea, principal investigator and professor and director of the Darrin Fresh Water Institute and member of the Center for Biotechnology and Interdisciplinary Studies at Rensselaer Polytechnic Institute. “The upside is the animals are more protected in moderately salt-polluted environments. But there is a cost for having this tolerance to salt, and as this work shows, one of the downsides is that the animals grow much more slowly.”

The finding is one of two articles in the special edition “Salt in freshwaters: causes, ecological consequences and future prospects,” published today. The issue explores how human activities that are increasing concentrations of salts in rivers, wetlands, and lakes “adversely affect freshwater biodiversity, and the ecosystem functions and services on which human societies rely.”

Relyea’s research team, which is investigating the effects of salt on aquatic environments through its work with the Jefferson Project on Lake George, also contributed an opinion piece calling attention to inadequate regulations. In “Regulations are needed to protect freshwater ecosystems from salinization,” the research team pointed to regional inconsistencies in regulations governing acceptable levels of salinization, and a failure to differentiate between different types of salts, despite their vastly disparate environmental effects.

“If we want to prevent salt pollution from harming our freshwater ecosystems, we need consequential regulations informed by science that protect fresh waters across ecosystems, not political jurisdictions,” said Matt Schuler, first author of the opinion article.

The research article, “Evolved tolerance to freshwater salinization in zooplankton: life-history, trade-offs, cross-tolerance and reducing cascading effects,” is one of 14 Relyea’s lab has published in the past two years on the effects of salt on aquatic ecosystems. In 2017, the team published research showing that a common species of zooplankton, Daphnia pulex, could evolve genetic tolerance to moderate levels of road salt in as little as two and a half months. Later that year, research conducted in cooperation with Rensselaer researcher Jennifer Hurley showed that the salt-adapted zooplankton had suppressed circadian rhythms.

“We knew there might be trade-offs, and we wanted to understand how those tradeoffs played out, from the individual organism to the ecosystem,” said Bill Hintz, first author of the research article.

In using descendants of the same salt-tolerant zooplankton the team raised the previous year, one finding was quickly apparent: tolerance is persistent. Although about 30 generations separated the original population from their descendants, both groups showed the same tolerance to salt.

“Because the salt-tolerant Daphnia are able to survive, you would hope that you wouldn’t see a big algal bloom. We see this for some salt types, but that’s not what we’re seeing for all salt types,” said Relyea. “The zooplankton are protected, but it doesn’t always stop the phytoplankton from blooming.”

The team also established that, although the zooplankton evolved higher salt tolerance in the presence of sodium chloride, they were also more tolerant of other common salt pollutants, such a magnesium chloride and calcium chloride, a trait known as “cross tolerance.”

Relyea, Hintz, and Schuler were joined in their work by Devin K. Jones, Miguel Canñedo-Argüelles, of the Universitat de Barcelona, Brenda Dyack of the University of Canberra, and Sebastian Birk of the University of Duisburg-Essen. The research was supported by the Jefferson Project at Lake George, a collaboration between Rensselaer, IBM Research, and The FUND for Lake George, dedicated to using advanced technology and science to understand and protect freshwater from the impacts of human activity.

Founded in 1824, Rensselaer Polytechnic Institute is America’s first technological research university. Rensselaer encompasses five schools, 32 research centers, more than 145 academic programs, and a dynamic community made up of more than 7,900 students and over 100,000 living alumni. Rensselaer faculty and alumni include more than 145 National Academy members, five members of the National Inventors Hall of Fame, six National Medal of Technology winners, five National Medal of Science winners, and a Nobel Prize winner in Physics. With nearly 200 years of experience advancing scientific and technological knowledge, Rensselaer remains focused on addressing global challenges with a spirit of ingenuity and collaboration. To learn more, please visit www.rpi.edu.