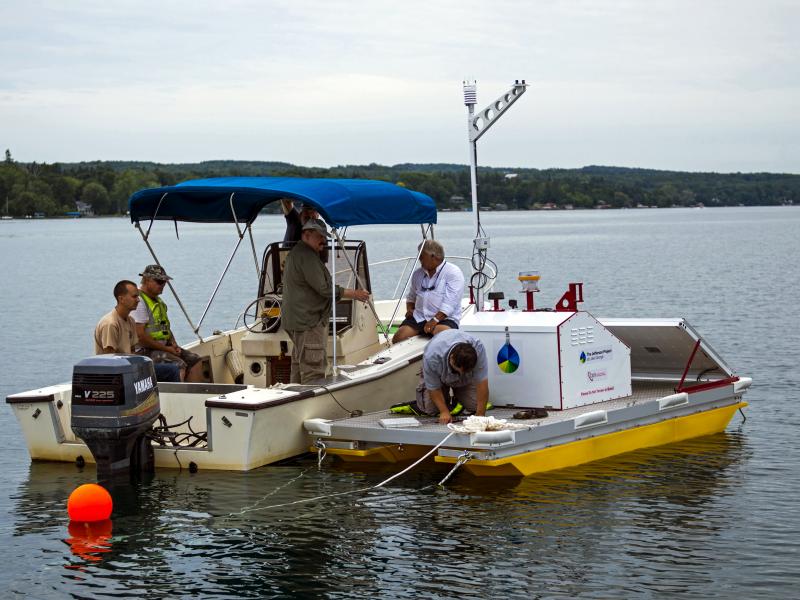 Lake George, N.Y. – The world’s most advanced environmental monitoring system – developed through The Jefferson Project at Lake George – is being used to understand and protect Skaneateles Lake, a central New York drinking water source now threatened by toxic algae. Building on a connection through the New York State Harmful Algal Bloom (HABs) Initiative launched in late 2017, the Jefferson Project installed a custom-designed robotic sensing platform on Skaneateles, and began collecting data just prior to an early-August HABs event this year.

The Jefferson Project at Lake George is a partnership between IBM Research, Rensselaer Polytechnic Institute, and The FUND for Lake George that combines advanced technology with science and advocacy to understand human impacts on fresh water and address the world’s looming freshwater supply challenges. The sensing platform, called a “vertical profiler,” is part of a four-month pilot project the Jefferson Project has undertaken in cooperation with the Skaneateles Lake Association and the Upstate Freshwater Institute.

“The ability to protect the natural resources of our planet, with fresh water vital among them, is one of the greatest challenges we face collectively across the globe,” said Shirley Ann Jackson, president of Rensselaer. “The Jefferson Project is pioneering a new approach and new tools that pinpoint the cause of threats to freshwater and empowers policy makers to enact solutions backed by the insights of science. We are pleased to offer the advanced technology of the Jefferson Project to local researchers working to protect Skaneateles Lake.”

Knowledge gained during the pilot project will aid Skaneateles Lake, while informing local and regional groups on Lake George and other Adirondack lakes seeking to prevent or react to harmful algal blooms. The Jefferson Project will collaborate with Skaneateles-area academic and government researchers, supported by the unparalleled data collection and modeling capabilities the Jefferson Project has developed. Measurements collected by sensing platforms on Skaneateles will be used to develop a series of powerful computer models that depict weather, runoff, and circulation throughout the lake, and enable ecosystem.

Since late July, the vertical profiler has been collecting environmental data, including measurements of weather, circulation, and water quality, and includes sensors capable of detecting phycocyanin, a pigment present in harmful algae. In collaboration with Skaneateles Lake regional experts, Jefferson Project researchers are in the process of analyzing a limited amount of data that was collected in relation to the 2018 HAB occurrence.

The Jefferson Project has developed the world’s most advanced sensor network to monitor Lake George, collecting nine terabytes of data annually from 51 sensor platforms and more than 500 individual sensors installed around the watershed. Data from monitoring inform experiments on lake threats, including road salt, invasive species, and nutrients. The data are also used to feed powerful computer models (generating more than 73 terabytes of data) that predict weather, runoff, and circulation of water and pollutants – like road salt – in the lake in high resolution. The project is also developing the capabilities to forecast changes in the ecosystem, which will make it possible to test the outcome of scenarios like pollution events or policy changes. Research results are available to policy makers seeking to protect the lake.

Both are also among the 12 lakes selected for Governor Cuomo’s New York State’s Harmful Algal Bloom (HABs) Initiative, launched in late 2017 to confront the growing threat of toxic algal blooms in water bodies across the state. Skaneateles Lake experienced its first HAB in the summer of 2017. Lake George, which has not experienced a HAB, will serve as the “control” lake for the HABs Initiative, which aims to reduce the risk of HABs through priority actions identified in separate Action Plans for each of the 12 lakes.

In June, as an outgrowth of the HABs initiative, a delegation from the Skaneateles Lake Association visited the Jefferson Project and The FUND for Lake George to discuss common threats facing the two “sister” lakes, and a potential collaboration to share knowledge and organize leadership in applying water quality protection programs for replication and scaling. The FUND presented its “Model for Enduring Protection of Lake George” that fuses partnerships, innovation, and direct investments to deliver measurable protections. The FUND will draw on the greater understanding of HABs gained through the pilot project in its own efforts to protect Lake George from the looming threat of toxic algal blooms.

“Given that Lake George and Skaneateles Lake are both experiencing intensifying pressure from human use creates a strong impetus for shared action,” said Jeff Killeen, chairman of the board of trustees of The FUND for Lake George. “New York’s HAB Initiative provides both a call to action and working structure, as well as a source of much needed public funding, that can ensure we succeed in protecting our waters. The advanced technologies of the Jefferson Project stand to benefit both lakes for generations to come.”

The pilot program will run from August through November, during which time the Jefferson Project will provide infrastructure and expertise. The vertical profiler was custom designed by Rensselaer and IBM researchers and built at the Rensselaer Center for Automated Technologies and Systems. It is the most advanced of its kind in the world. The vertical profilers contain multiple instruments, including a winch-driven set of water sensors that move up and down through the water column collecting data on dissolved organic matter, Chlorophyll a (an index of phytoplankton), chloride, conductivity, temperature, and pH. Also on board is a weather station, an acoustic Doppler current profiler for measuring lake currents, and a surface phycocyanin sensor to detect harmful algal blooms near the lake’s surface. The robotic assembly, powered by solar cells, is controlled by an onboard IBM intelligent Internet of Things computing node that semi-autonomously determines where and when to collect data and transfer it to supercomputers at IBM Research and Rensselaer, where the data can be analyzed and stored. Machine learning will be applied to detect ongoing trends on the lake and to manage the sensor system.

Since its 2013 launch, the Jefferson Project has garnered increasing recognition as a global model for freshwater ecosystem understanding and sustained protection. World-leading science and technologies of the Jefferson Project are being brought to bear on developing data-driven techniques, including new tools that could be applied for predicting and detecting HABs on Lake George and now Skaneateles Lake.

About The FUND for Lake George